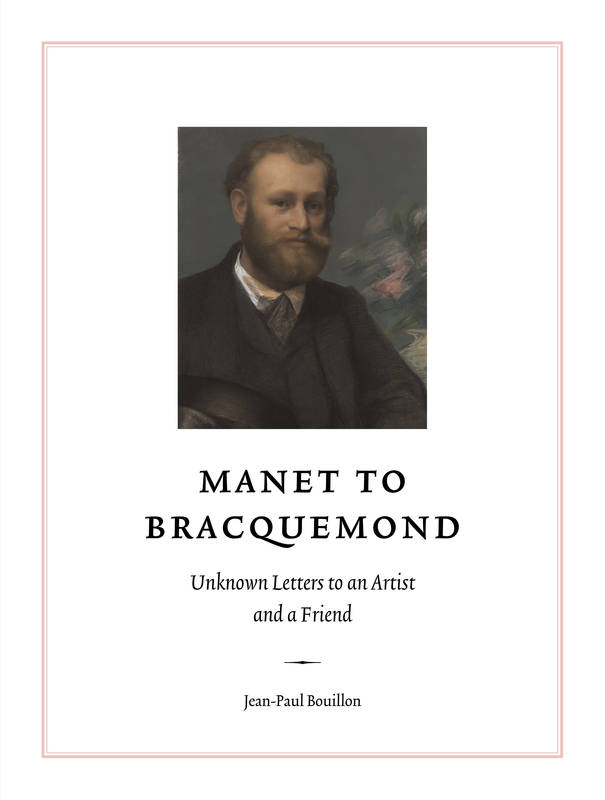 Manet to Bracquemond : Unknown Letters to an Artist and a Friend

Manet to Bracquemond : Unknown Letters to an Artist and a Friend

This new edition publishes the letters adressed by Édouard Manet (1832–1883) to his friend, the artist Félix Bracquemond (1833–1914). The correspondence, for the most part unknown, surfaced at a sale in Paris in June 2016 and was acquired the next year by the Fondation Custodia with the generous help of Jean-Luc Baroni. It is edited here for the first time by Jean-Paul Bouillon, whose lifelong occupation with Bracquemond’s life and work has enabled him to situate the mostly undated letters accurately and discuss their contents in the context of both artist’s careers.

The letters are presented in their original French language, accompanied by meticulous comments on their dating and subject matter, whereas illustrations reproduce most of the works alluded to in the texts. They are preceded by a comprehensive introduction on the friendship between the two men which highlights the principal subjects and themes around which the correspondence revolves over the years. Bracquemond and Manet probably met around 1860, at a time when Manet was beginning to take an interest in the potential of printmaking for disseminating his work. Both were among the founders of the ‘Société des Aquafortistes’ in 1862 and in these years Manet must have relied heavily on Bracquemond, the outstanding engraver of his generation, for his first attempts in the technique. The new interest in etching had a fierce supporter in Charles Baudelaire, who figures besides the two artists in Henri Fantin-Latour’s Homage to Delacroix of 1864, the year Bracquemond portrayed his friend in an important pastel which is here reproduced for the first time in its original form.

Many of the letters attest to the frequent, at times almost daily, contacts between the two men, who met in Manet’s studio, at artist’s cafés like the café de Bade and the Guerbois, and at dinners with Manet, his wife and his mother. Others concern joint projects, such as the illustration of Émile Zola’s brochure issued at the occasion of Manet’s solo exhibition of 1867, or Manet’s ex-libris designed by Bracquemond in 1875. Their strong bond emerges perhaps most clearly from two longer letters in which Manet, writing from Arcachon – where, awaiting the end of the Commune, he tried to recover from the privations he suffered during the Siege of Paris in 1870 – poured his heart out to Bracquemond about the country’s political situation. Laconic in form as most of the letters are, the correspondence will certainly prove to be an important source for our knowledge of Manet’s life and dealings which, after more than a century of intense scholarship, still presents many a gap.

This book is published by Ad Ilissum as the second volume in the series The Fondation Custodia Studies in the History of Art, which reflects and continues forward into the present the scholarly interests of the institution’s founder, Frits Lugt.
S'identifier pour envoyer des commentaires.